How the World’s Oldest Wooden Sculpture Is Reshaping Prehistory 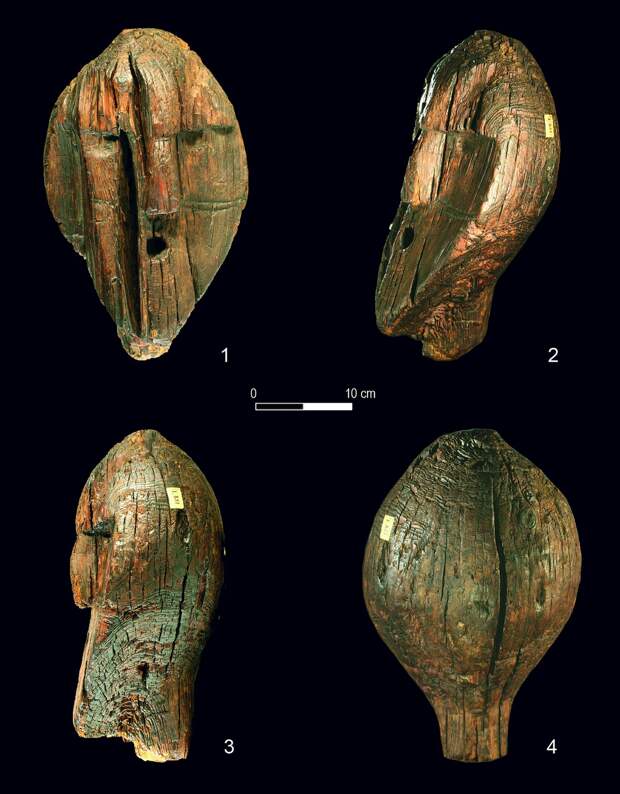 Four views of the head of the Shigir Idol, a nine-foot-tall totem pole made of larch and discovered in a Russian peat bog in 1890.Credit...Sverdlovsk Regional Museum

At 12,500 years old, the Shigir Idol is by far the earliest known work of ritual art. Only decay has kept others from being found.

The world’s oldest known wooden sculpture — a nine-foot-tall totem pole thousands of years old — looms over a hushed chamber of an obscure Russian museum in the Ural Mountains, not far from the Siberian border. As mysterious as the huge stone figures of Easter Island, the Shigir Idol, as it is called, is a landscape of uneasy spirits that baffles the modern onlooker.

Dug out of a peat bog by gold miners in 1890, the relic, or what’s left of it, is carved from a great slab of freshly cut larch. Scattered among the geometric patterns (zigzags, chevrons, herringbones) are eight human faces, each with slashes for eyes that peer not so benignly from the front and back planes.


The topmost mouth, set in a head shaped like an inverted teardrop, is wide open and slightly unnerving. “The face at the very top is not a passive one,” said Thomas Terberger, an archaeologist and head of research at the Department of Cultural Heritage of Lower Saxony, in Germany. “Whether it screams or shouts or sings, it projects authority, possibly malevolent authority. It’s not immediately a friend of yours, much less an ancient friend of yours.”

In archaeology, portable prehistoric sculpture is called “mobiliary art.” With the miraculous exception of the Shigir Idol, no Stone Age wood carvings survive. The statue’s age was a matter of conjecture until 1997, when it was carbon-dated by Russian scientists to about 9,500 years old, an age that struck most scholars as fanciful. Skeptics argued that the statue’s complex iconography was beyond the reach of the hunter-gatherer societies at the time; unlike contemporaneous works from Europe and Asia featuring straightforward depictions of animals and hunt scenes, the Shigir Idol is decorated with symbols and abstractions.

In 2014, Dr. Terberger and a team of German and Russian scientists tested samples from the idol’s core — uncontaminated by previous efforts to conserve the wood — using accelerator mass spectrometry. The more advanced technology yielded a remarkably early origin: roughly 11,600 years ago, a time when Eurasia was still transitioning out of the last ice age. The statue was more than twice as old as the Egyptian pyramids and Stonehenge, as well as, by many millenniums, the first known work of ritual art. 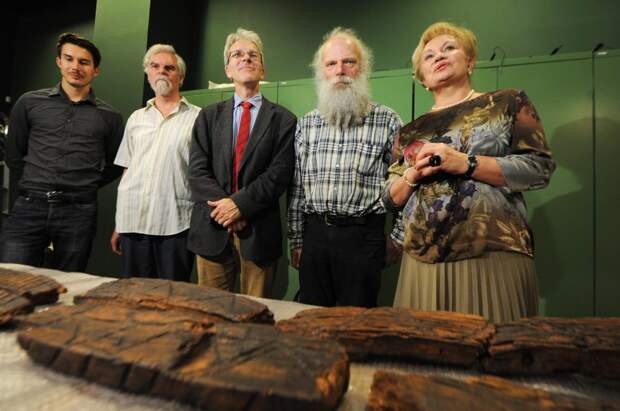 A new study that Dr. Terberger wrote with some of the same colleagues in Quaternary International, further skews our understanding of prehistory by pushing back the original date of the Shigir Idol by another 900 years, placing it in the context of the early art in Eurasia.

“The idol was carved during an era of great climate change, when early forests were spreading across a warmer late glacial to postglacial Eurasia,” Dr. Terberger said. “The landscape changed, and the art — figurative designs and naturalistic animals painted in caves and carved in rock — did, too, perhaps as a way to help people come to grips with the challenging environments they encountered.”

Written with an eye toward disentangling Western science from colonialism, Dr. Terberger’s latest paper challenges the ethnocentric notion that pretty much everything, including symbolic expression and philosophical perceptions of the world, came to Europe by way of the sedentary farming communities in the Fertile Crescent 8,000 years ago.

“Ever since the Victorian era, Western science has been a story of superior European knowledge and the cognitively and behaviorally inferior ‘other,’” Dr. Terberger said. “The hunter-gatherers are regarded as inferior to early agrarian communities emerging at that time in the Levant. At the same time, the archaeological evidence from the Urals and Siberia was underestimated and neglected. For many of my colleagues, the Urals were a very terra incognita.”

To João Zilhão, a paleoanthropologist at the University of Barcelona who was not involved in the study, the take-home message of the research is that absence of evidence is not evidence of absence.

“It’s similar to the ‘Neanderthals did not make art’ fable, which was entirely based on absence of evidence,” he said. “And then the evidence was found and the fable exposed for what it was. Likewise, the overwhelming scientific consensus used to hold that modern humans were superior in key ways, including their ability to innovate, communicate and adapt to different environments. Nonsense, all of it.”

Dr. Zilhão said the Shigir Idol findings revealed the extent to which preservation biases affect our understanding of Paleolithic art. “Most of the art must have been made of wood and other perishables,” he said. “Which makes it clear that arguments about the wealth of mobiliary art in, say, the Upper Paleolithic of Germany or France by comparison to southern Europe, are largely nonsensical and an artifact of tundra (where there are no trees and you use ivory, which is archaeologically visible) versus open forest environments (where you’d use wood, which is archaeologically invisible).” 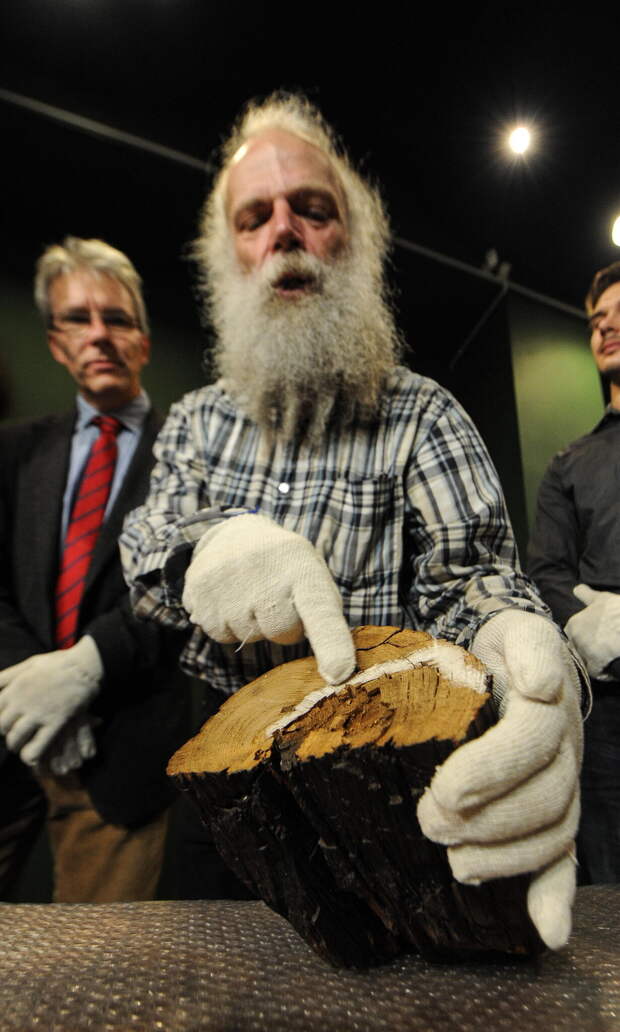 Dr. Heussner of the German Archaeological Institute indicating the rings of a piece of the idol in 2014.Credit...Itar-Tass News Agency, via Alamy 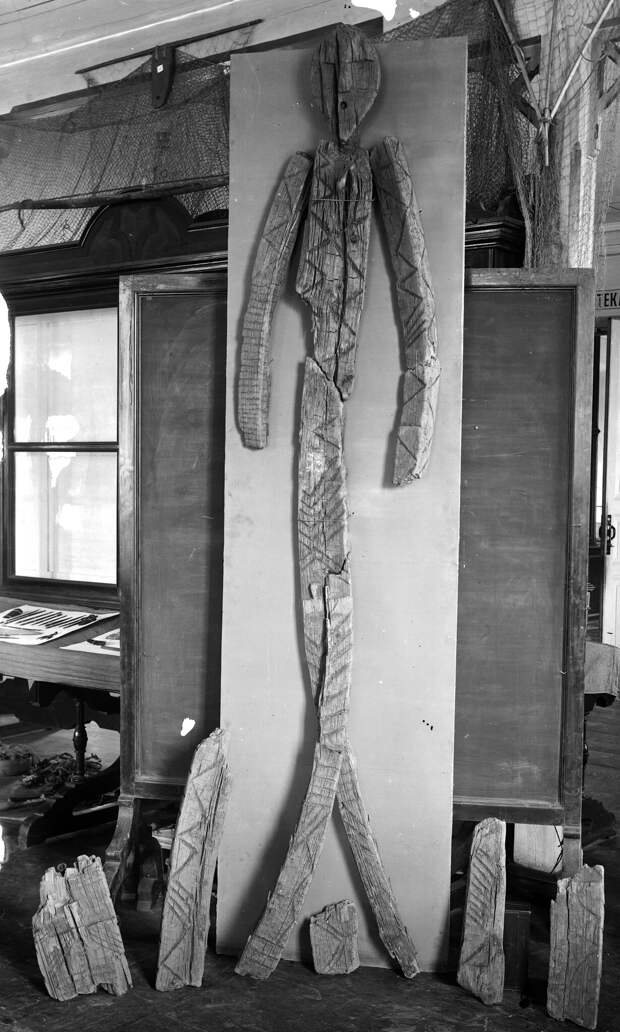 An early reconstruction of the sculpture from 1894.Credit...Sverdlovsk Regional Museum

Olaf Jöris, of the Leibniz Research Institute for Archaeology, agreed. “The new Shigir evidence makes archaeologists daydream of how the archaeological record may have looked if wooden remains had been preserved in greater abundance,” he said.

The Shigir Idol, named for the bog near Kirovgrad in which it was found, is presumed to have rested on a rock base for perhaps two or three decades before toppling into a long-gone paleo-lake, where the peat’s antimicrobial properties protected it like a time capsule. In the mid-19th century, gold was discovered beneath the mire, and the landowner, Count Alexey Stenbok-Fermor, hired laborers to mine the open-air site for ore. He instructed them to save any other objects they unearthed.

Thirteen feet down the idol was discovered, and retrieved in 10 fragments. The pieces were carted 60 miles to Yekaterinburg, the city where, 28 years later, the last czar of the Russian Empire, Emperor Nicholas II; his wife, Alexandra; and their children would be executed by the Bolsheviks. In Yekaterinburg, the count’s donation was displayed with bone arrowheads, slotted bone daggers, a polished elk antler and other ancient bog finds at the Urals Natural Sciences Society, today known as the Sverdlovsk Regional Museum of Local Lore.

The director of the museum allowed the railroad stationmaster, Dmitry Lobanov, an aspiring archaeologist, to assemble the main fragments into a nine-foot-tall figure with legs crossed tightly in a pose that potty-training parents of any epoch might recognize.

“It was not a scientific construction,” said the archaeologist Mikhail Zhilin of the Russian Academy of Sciences, a co-author of the new study. The idol stayed locked in that uncomfortable position until 1914, when the archaeologist Vladimir Tolmachev suggested incorporating the remnants into the finished work — increasing its height to almost 17 and a half feet. Much of the bottom half later went missing; Mr. Tolmachev’s sketches of the section are all that remain.

For more than a century, the Shigir Idol was considered a curiosity, assumed to be at most a few thousand years old. The radiocarbon analysis in 1997 was greeted with derision by some scientists who found the conclusions implausibly old. Some doubters even suggested that the statue was a forgery. 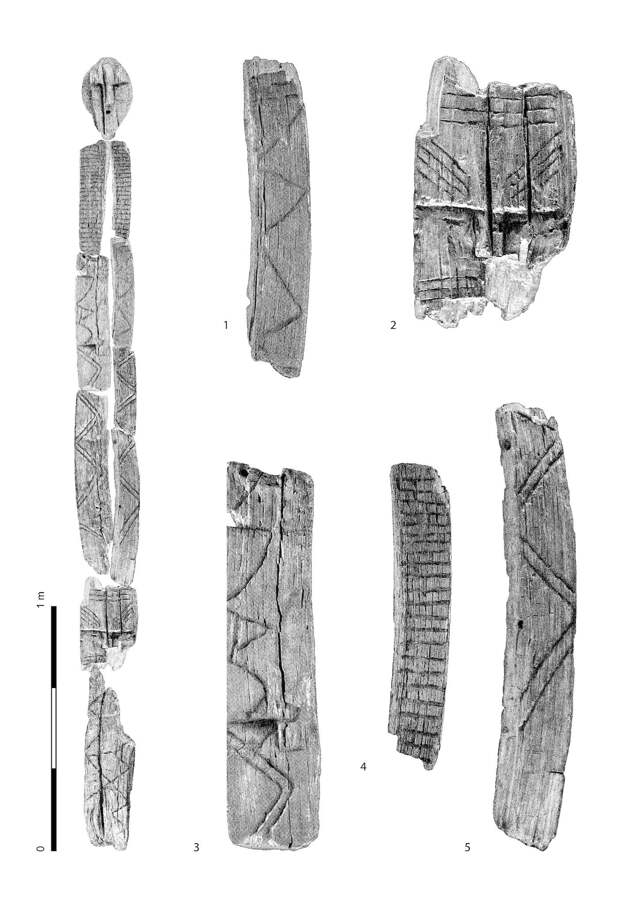 A modern drawing of the Shigir Idol with scale, left, and details of the geometric decoration on individual fragments.Credit...Sverdlovsk Regional Museum

Dr. Terberger and his colleagues have settled that question in their new study, demonstrating conclusively that the larch was a literal tree of knowledge. The timber was at least 159 years old when the ancient carpenters began to shape it.

“The rings tell us that trees were growing very slowly, as the temperature was still quite cold,” Dr. Terberger said. Given the speed with which larch logs rot and warp, the researchers determined that the idol was fashioned from a tree that had just been cut. And from the widths and depths of the markings, Dr. Zhilin deduced that the cuts were made by at least three sharp chisels, two of which were probably polished stone adzes and the other possibly the lower jaw of a beaver, teeth intact. (On the subject of beaver mandibles, Dr. Terberger respectfully disagrees. “During the period of rapid cooling from about 10,700 B.C. to 9,600 B.C. that we call the Younger Dryas, no beavers should have been around in the Transurals,” he said.)

And what do the engravings mean? Svetlana Savchenko, the artifact’s curator and an author on the study, speculates that the eight faces may well contain encrypted information about ancestor spirits, the boundary between earth and sky, or a creation myth. Although the monument is unique, Dr. Savchenko sees a resemblance to the stone sculptures of what has long been considered the world’s oldest temple, Göbekli Tepe, whose ruins are in present-day Turkey, some 1,550 miles away. The temple’s stones were carved around 11,000 years ago, which makes them 1,500 years younger than the Shigir Idol.

Marcel Niekus, an archaeologist with the Foundation for Stone Age Research in the Netherlands, said that the updated, older age of the Shigir Idol confirmed that it “represents a unique and unparalleled find in Europe. One could wonder how many similar pieces have been lost over time due to poor preservation conditions.”

The similarity of the geometric motifs to others across Europe in that era, he added, “is evidence of long-distance contacts and a shared sign language over vast areas. The sheer size of the idol also seems to indicate it was meant as a marker in the landscape that was supposed to be seen by other hunter-gatherer groups — perhaps marking the border of a territory, a warning or welcoming sign.”

Dr. Zhilin has spent much of the last 12 years investigating other peat bogs in the Urals. At one site he uncovered ample evidence of prehistoric carpentry — woodworking tools and a massive pine plank, roughly 11,300 years old, that he believes had been smoothed with an adze. “There are many more unexplored bogs in the mountains,” Dr. Zhilin said. Unfortunately, there are no ongoing excavations.

During a recent video conversation from his home in Moscow, Dr. Zhilin asked his interviewer in the United States: “What do you think is the hardest thing to find in the Stone Age archaeology of the Urals?”